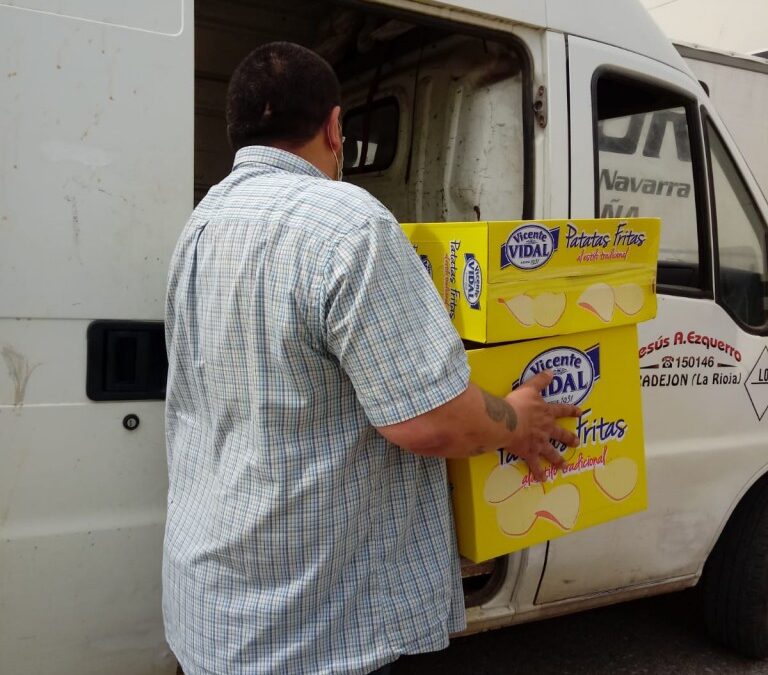 The company started a product donation campaign where its employees are the ones in charge of suggesting centres.

Ribaforada, 12 May 2020 – The current situation has reshaped our lives in an unprecedented way. And with it, new measures have been adopted to be able to face our changing needs. Grupo Apex, the second leading company at the state level in the crisps and snacks sector, has set into motion different actions to contribute to improving the situation, concentrating especially on front-line workers and the situation in its 6 centres and more than 400 employees in Spain.

These actions include the donation of products and collaboration in making protective equipment for the groups and companies most affected by the health crisis. It is unique in that it is a campaign that Apex divided among its workers, allowing each of them to suggest and choose where to donate. “The situation we are going through affects everybody differently. We are conscious of this fact and eager to help towards improving each one using what we have to offer, so we started this campaign, a collaborative action in which every member of the Group’s staff plays an active role” explained Santiago Sala, Director-General.

Through this initiative, the Group has shared more than 80,000 items across Spain, mainly in the areas of León, Navarre, Madrid and Valencia. This is not a definitive figure as the initiative is still ongoing.

We have seen a variety of destinations for these products: Hospitals, such as Hospital Reina Sofía in Navarre or Hospital de León. Foundations such as Fundación Aaqua or Fundación Padre Garralda in Madrid. Food banks such as the one in Tudela or companies such as La Merienda in Barcelona. Numerous homes such as Residencia San Bartolomé in Marcilla or Hermanitas de los Ancianos Desamparados in Valencia. Cáritas de Astorga in León and Bellreguard and Benifaió in Valencia. Youth centres such as El Alba in León and other centres for the homeless such as the Albergue Personas Sin Hogar (the Homeless Shelter) in Tudela. Care homes for people with disabilities, such as the Atalaya centre in Tudela and the Funcional Vencerol (Vencerol Sheltered Accommodation facility). And to other associations, such as Villa Javier and La Romaní in Navarre. Social services such as those in Corella. Services such as the Red Cross in Abiltas, Civil Protection and 112 in Tudela, plus other companies who, given the state of emergency, have directed their efforts towards the health crisis, such as Basalan in Bizkaia. Donations have also been made to security bodies such as the Regional Police Headquarters in León and the Military Emergency Response Unit; and other spaces which have been converted for people requiring healthcare, such as the San Esteban Pavilion in León. Additionally, donations have been made as part of talks and collaboration with local councils, including those in León, Almussafes, Castejón and Tudela.

At the same time, Grupo Apex has been implementing plans to help reopen small companies and businesses that have been affected by the temporary halt in activities.

With headquarters in Ribaforada (Navarre), and a turnover of €82 million in 2019, Grupo Apex specialises in the production and sale of quality snacks, nuts and crisps. Some of its most well-known brands are Aspitos, Jumpers, Popitas, Marinas, Vicente Vidal, Jojitos and Puntazos, among others. The Group is characterised by its strong commitment to quality, ensuring careful monitoring of the production process from start to finish, always searching for ways to improve innovation, nutrition and sustainability. All this has helped Grupo Apex to become a leading company in the sector, with a presence in all sales channels.